Novoceram, French ceramics manufacturer since 1863, celebrates the power of Passion with « The Passion Project »: a multichannel operation that includes an online spy game on his Facebook page and an exhibition stand at Cersaie 2011, in the style of the great spy films of the 70s, who won the Best Design Exhibit Award.

Novoceram, French ceramics manufacturer since 1863, celebrates the power of Passion with « The Passion Project »: a multichannel operation that includes an online spy game on his Facebook page and an exhibition stand at Cersaie 2011, in the style of the great spy films of the 70s, who won the Best Design Exhibit Award.

Novoceram, French ceramics manufacturer since 1863, presents at Cersaie 2011, the International Exhibition of Ceramic Tile and Bathroom Furnishings, « The Passion Project« : an operation on two fronts – online and offline – to celebrate the power of Passion.

On line: The Novoceram Facebook fan pagebecomes the scene of a friendly competition between three French bloggers, Mercotte, Bango and Vincent, selected to represent each his own Passion: cooking, design and art. To win the challenge, the three bloggers invite their readers to participate in a quiz on the fan page where becoming secret agents to accumulate points in favor of a non-profit association to which the winner blogger will donate the prize of 5000 Euros raffled by Novoceram.

Off line: The booth at Cersaie 2011, is designed by Francesco Catalano as a real haven for secret agents, in the style of the great spy movies of the 70s, to take up the theme of the game online. Three major areas are dedicated to bloggers, protagonists of the online game, who tell there their own story and their own vision of the Passion, while three imposing video walls shows the faces of Facebook Fans of Novoceram involved in the game, creating a continuity between the stand and the application online.

The booth is also a perfect exhibition space for the products of Novoceram: the ceramic wood Noa, the stone effect collections Cast and Icône, the bathroom wall tiles Madras and the system Novoceram Outdoor plus.

The stand The Passion Project received the prestigious Best Exhibit Design Award 2011: precise evidence of its own thesis, demonstrating that Passion is the best ingredient of every small and great success.

To follow the backstage and all the secrets of « The Passion Project » and to (re)discover all the other Novoceram events, visit the website or the Facebook page. 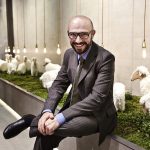