Novoceram at D&Co : behind the scenes of the television programme

It all began in early January 2012 with a telephone call from the team from “D&CO – Une semaine pour tout changer”, the cult programme presented by Valérie Damidot on the French channel M6 in which a different house is completely made over in each episode and the metamorphosis followed step by step. The presenter had discovered the Novoceram range some time before and let us know that she would like to use 80 m2 of one of our products to renovate the living room and kitchen floors of the home of a large family in La Neuville sur Essonne, Loiret, the subject of one of the next episodes of the programme. 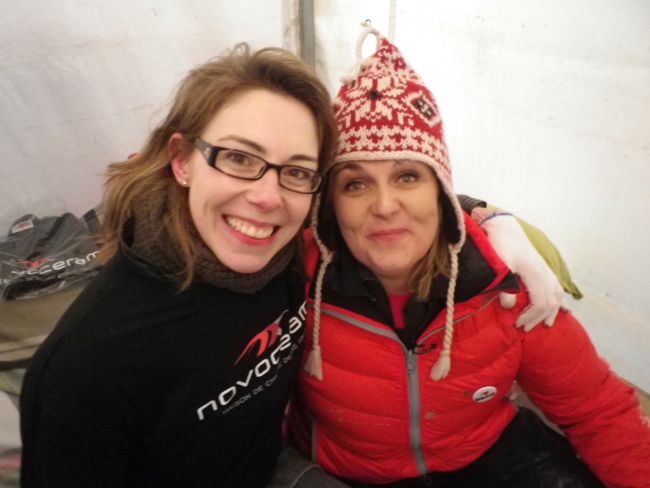 Valérie Damidot and her team of decorators, inspired by the products in the Novoceram Charme line, finally chose the 60×60 cm rectified size Slate colour tiles in the Samsara collection. As proof of their enthusiasm for this product, they decided to extend the same floor to both the main rooms, contrary to the initial plan which was to put a wood parquet floor in the living room.

Filming took place from 8 to 15 February 2012 in unpropitious weather conditions, during the big freeze that covered Europe at that time. The entire D&Co team and the partners therefore equipped themselves to install enormous radiators to heat the inside of the house to allow the work to progress quickly. 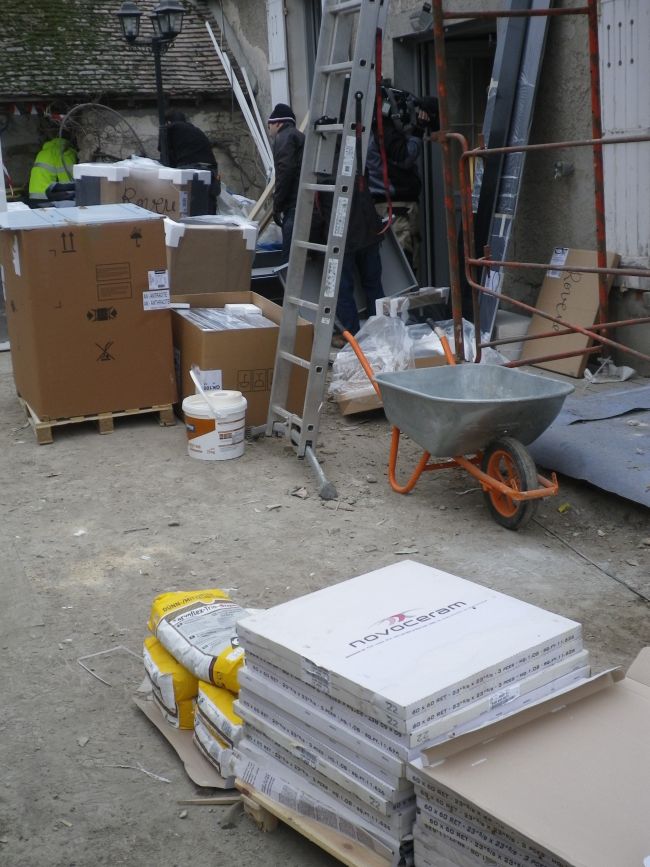 They began laying the tiles on Sunday morning in the kitchen; it all went perfectly and quickly thanks to the professionalism of the two tile layers of the D&CO team. In the photos below the previous kitchen floor can be seen and the arrival of the tiles coordinated by the site manager, Gaël (in the orange overall), who monitored the work very carefully. 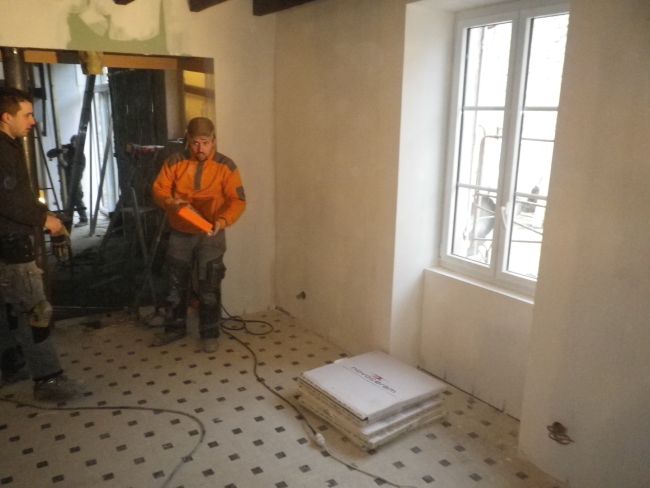 The kitchen and living room are separated by 3 small steps and Novoceram also provided special tiles for the 30×60 cm steps in the non-slip structured version which, as well as providing extra safety, highlighted the perfect compatibility between the indoor and the outdoor versions, as can be seen in the photo below, taken in the kitchen, which is also on two levels. 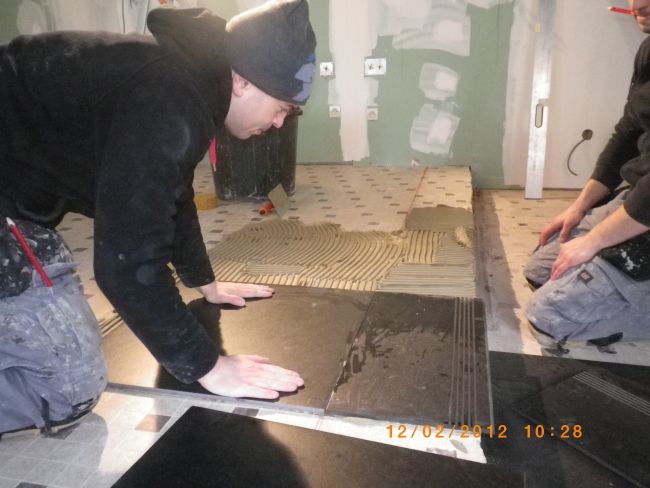 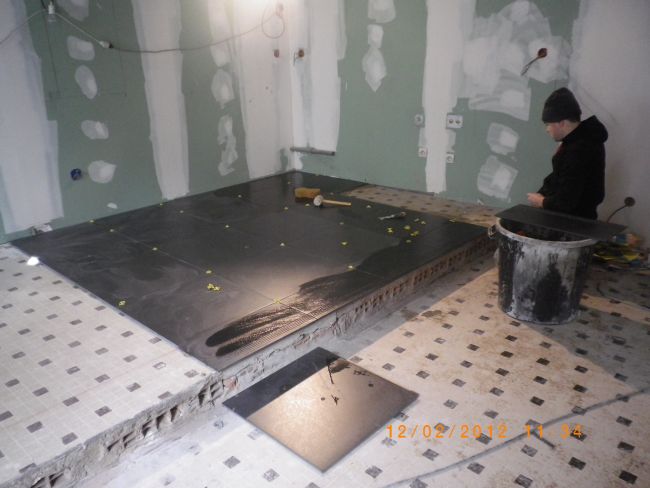 Laying the living room tiles, visible in the pictures below, proved more complex because of the amount of cutting to be done to follow the shape of the steps and also because of the very irregular base which required more glue to be used than expected. However, here is the excellent end result obtained on the second day: 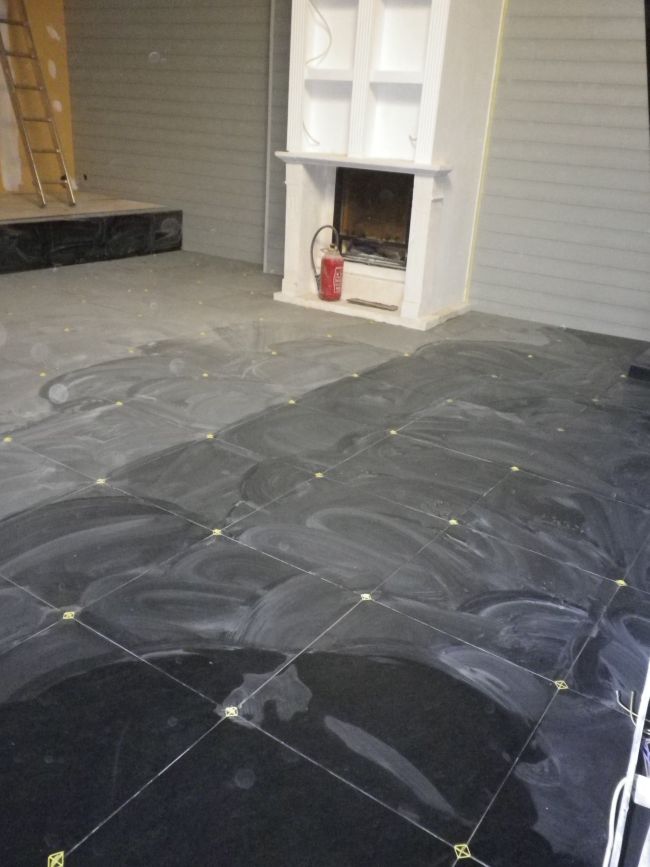 The tile layers also had to cope, with the help of the laser level, with huge problems caused by the straightness of the walls of the ancient building! 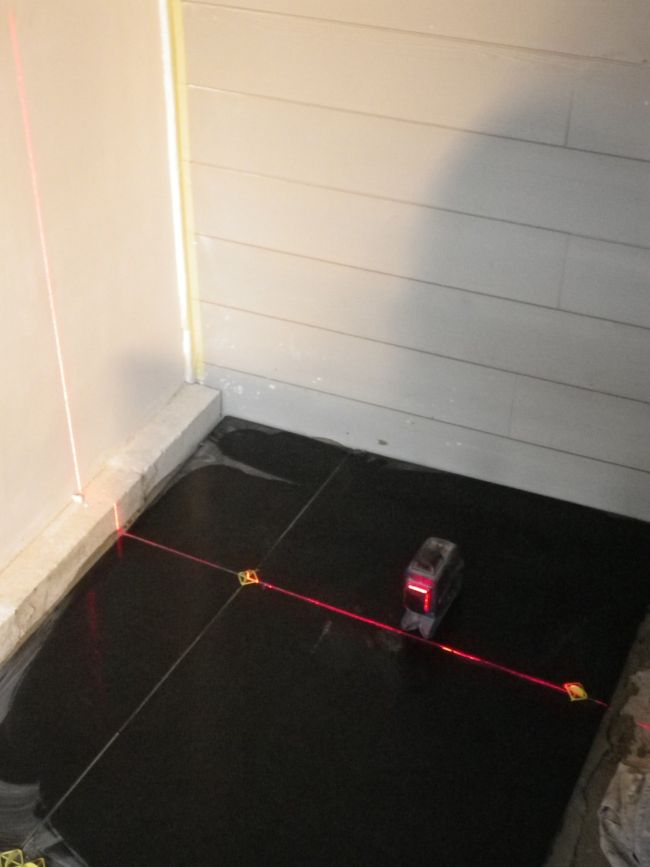 When the water saw, set up outside the site to avoid noise and dust, took its last breath…

….we had to conclude that nothing equals the good old hand cutter! 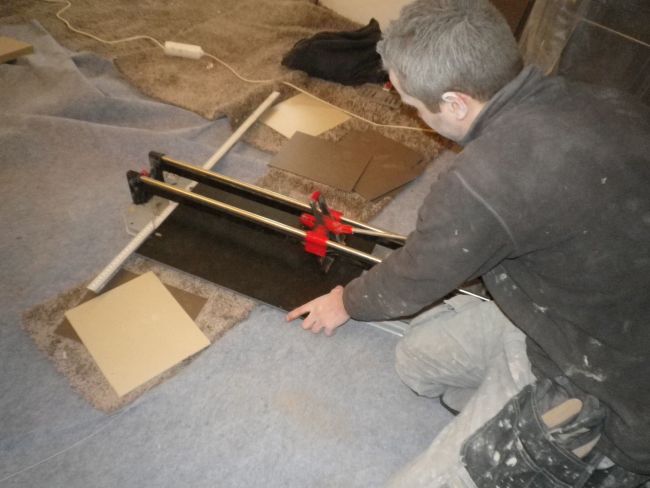 The idea of the D&CO programme is that everyone can become a DIY expert – even me!

The house was completely redesigned to make best use of all the spaces: the lofts were redesigned to house the two bedrooms for the 4 children of the family, each with its own bathroom. The master bedroom, designed entirely in shades of beige and brown, was supplemented by a 6 m2 wardrobe and an elegant bathroom. A room dedicated to games, music and free time was also created. The kitchen was completely transformed and made much more contemporary with a new anthracite grey colour range, perfectly coordinated with the floor tiles. Outside, instead of the existing beaten earth surface, a wooden terrace was created with a large pergola to enjoy summer evenings in.

The progress of the tile laying and all the work was filmed in its entirety by two cameramen, but only the best moments will be kept during editing, integrated with shots presented by Valérie Damidot. 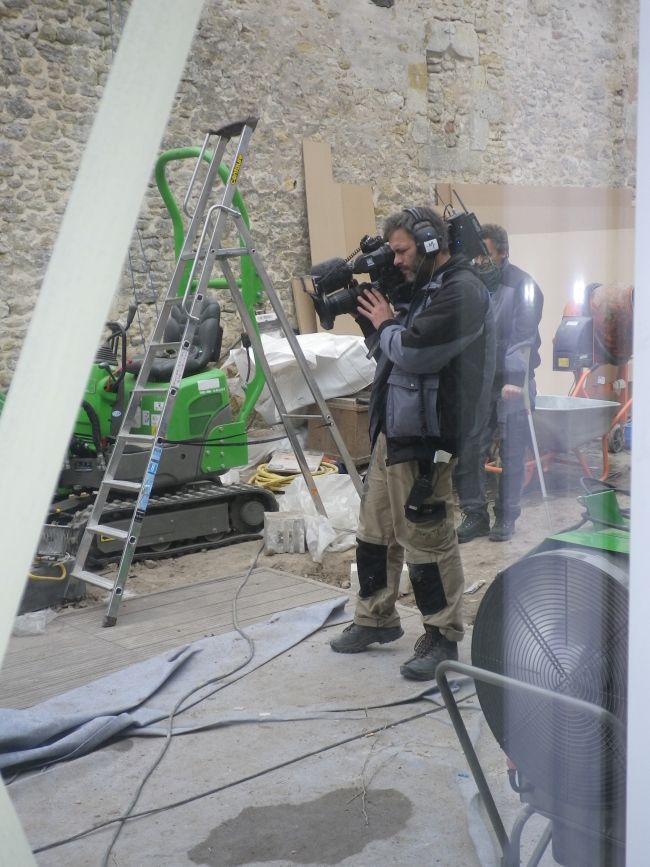 I can confirm that the promise in the name of the programme (a week to change everything) was kept perfectly! It was a great challenge for all the craftsmen, to the point that some of them even had to work at night – like the superhero tile layers who could still smile in the photo below even after 36 hours of non-stop work! 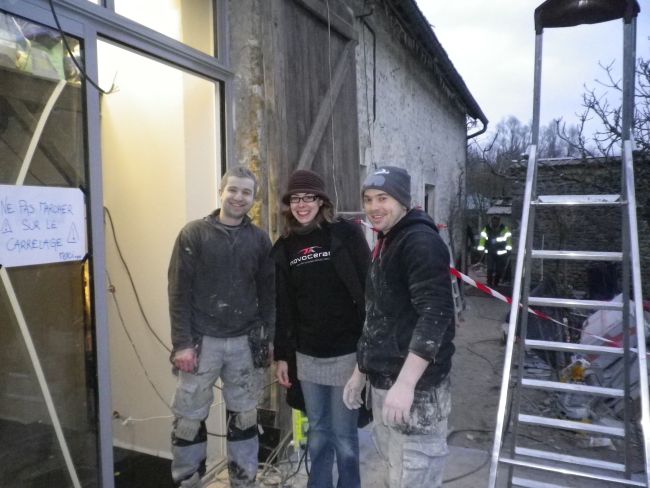 The family who owned the house was very moved by the generosity of all the partners and the incredible efficiency with which all the work was carried out. The final layout and the extremely careful decoration of the house have completely changed the house’s appearance, making it more comfortable and functional, to the joy of those who will live in it!

The episode of “D&Co – Une Semaine Pour Tout Changer” will be broadcast on WEDNESDAY 21 MARCH at 20.45 on M6. Meanwhile, tell us what you think of it and discover the complete photo album of the shoot on the Novoceram Facebook page!