At the beginning of Cersaie 2010, in the article “Water, a species in danger of extinction”, Novoceram announced its intention to reduce water consumption by about 30% by the end of 2010 with respect to 2009 consumption. In the spring of 2011, this prediction was exceeded by a wide margin – the actual saving was in fact nearly 40%! Excellent news for Novoceram which invested heavily to achieve this result.

The reduction in water consumption was largely obtained through different use of the double water circuit – groundwater and recycled water. Faithful to its environmental policy, Novoceram has substantially reduced its use of groundwater, giving priority to re-utilisation of the water used in its departments.

The water circuit is now practically closed and Novoceram uses groundwater exclusively to make up the water lost during evaporation in the atomiser.

The company also has a new purification station, enabling it to operate completely independently, replacing the well water to the maximum possible. A control system enables possible malfunctions to be monitored and resolved rapidly. Water recycling is optimised to allow the water to be used without treatment as far as possible, saving the energy required by the purification process. 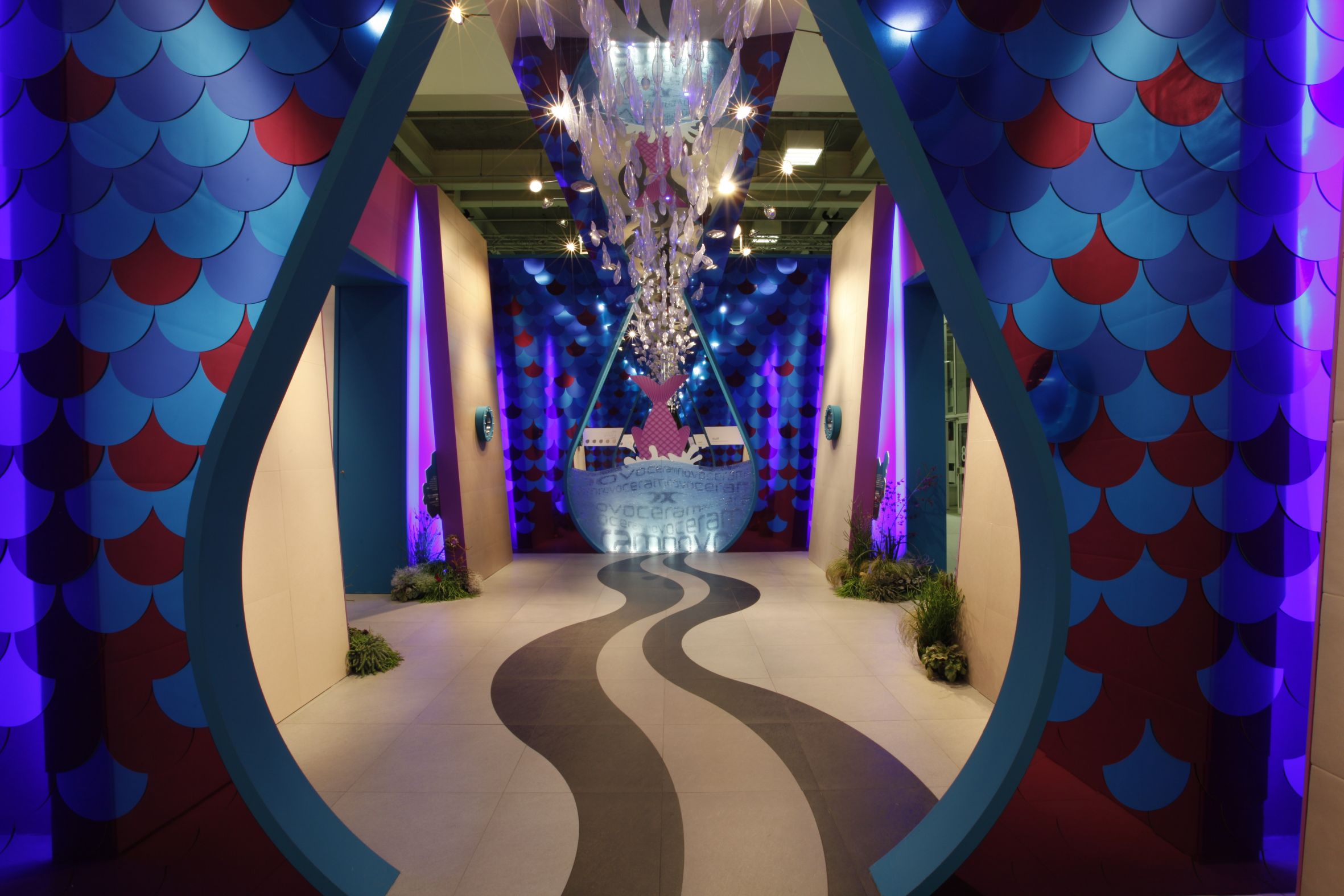 Already in the past Novoceram has more than once demonstrated its commitment to protecting the environment, as confirmed by ISO 14001:2004 environmental management certification.

With the debut of this new water saving era, Novoceram’s aim was to heighten its customers’ awareness with a strong message and the company took the opportunity of the great Cersaie event to create a stand entirely concentrated on the theme of water. This was the logic behind Stand O at Cersaie 2010.

Stand O (see previous photograph) was a way of remembering that drinking water, now paradoxically rare on the blue planet, deserves to be placed at the centre of mankind’s efforts in favour of the environment. The setting, furniture, colours, music and atmosphere of the stand all transported visitors into a calm regenerating underwater universe. To dive (or dive again) into this delightful space, you can watch this video. And – given that this vast theme inspired a refreshing animation – we also invite you to discover “Inspiration no.10”

Novoceram’s efforts to conserve the planet’s resources do not stop here. The technical department is also working to save electricity and is defining a new project to reduce energy consumption. We will keep you in touch with our latest progress and we invite you to visit us at Cersaie 2011 from 20 to 24 September on “The Passion Project”, stand, inspired by the theme of passion, with the innovative participation of 3 Passion Leaders who passionately… support three humanitarian missions.