Ironic, irreverent, provocative. The 2016 edition of Cersaie, the Ceramic Trade Fair for Architecture and Bathroom Furnishing, sees the entry of the boldest collection yet into the Art catalogue by Novoceram. With no less than sixty-three different subjects made of glazed porcelain stoneware in the 20×20 cm size, Indigo mixes themes that draw inspiration from iconographic traditions that are stylistically and chronologically very far apart. 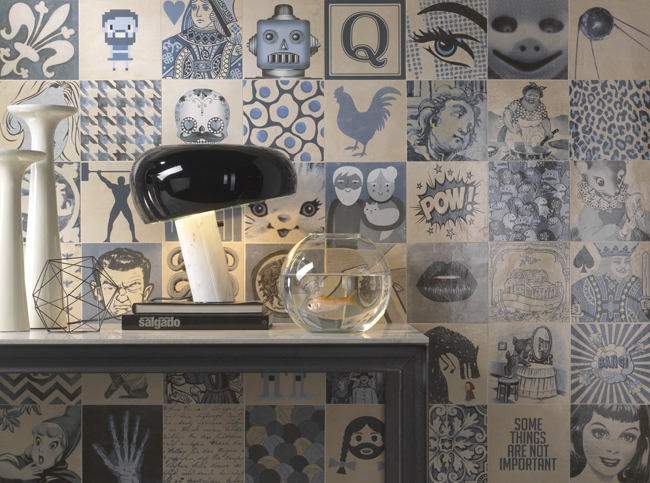 How can a detail from a masterpiece dating back to the 15th century, such as the Portrait of a Young Girl by Petrus Christus, appear alongside an illustration taken from a book of fairytales from the 20th century or the texture of a leopard skin? How can the bee, symbol of the imperial power of Napoleon, end up alongside the onomatopoeia of a comic from the 50s? Or the decor of a tile dating back to the 3rd century share the same square meter of floor with a pied-de-poule motif and the unmistakable outline of Sputnik 1, the Soviet Space probe that first man-made object to complete an orbit around the Earth, on October 4, 1957, at the height of the Cold War?

Yet, each of the sixty-three images that appear on the tiles of the Indigo collection represents an icon of the period and the style it belongs to, in so doing leaving its mark on the memory while at the same time building the collective imaginary of the history of decors over the past ten centuries. 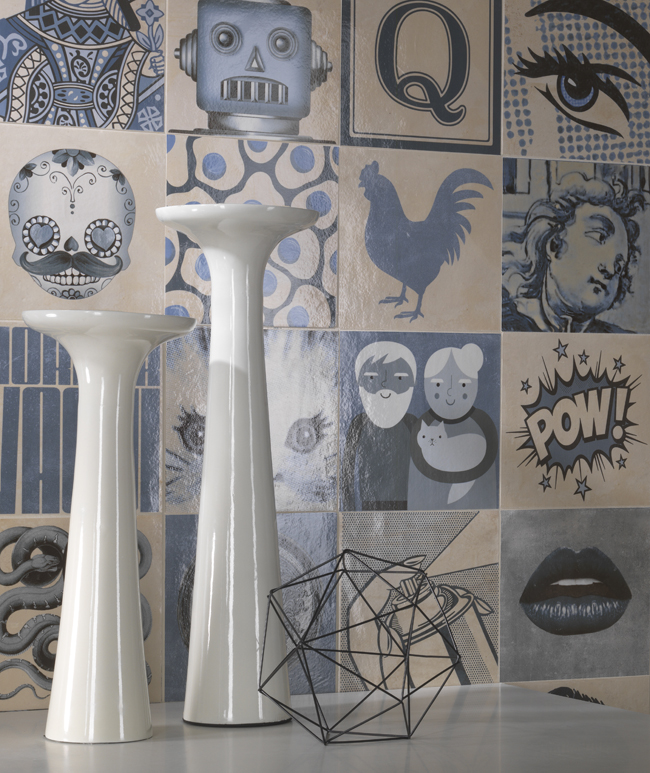 The reworking in ceramic of these images relies upon a bold reinterpretation of the antique technique of the azulejo, playing upon contrasts between the white of the backdrop and the countless shades of cobalt blue: a technique that represents a sort of fascinating and evocative black and white of the ceramic decoration and crystallizes it into a kind of shared déjà-vu of once seen yet forgotten images of events that took place in the past and an undefined moment of our lives.

It is the methodic lack of consistency in the selection of the subjects, the constant matching between high and low, of the trivial and the refined, of the classic and the pop, of culture and folklore, that becomes the stylistic code, the novelty and originality of a collection of ceramic tiles, which, as well as being able to bring enjoyment to an expert eye, who can delight in finding the dozens of hidden references, is also able to provide enjoyment to anyone who appreciates the beauty and the lightness of the final aesthetic result.

Made in glazed porcelain stoneware, Indigo can be used either as a wall-tile or as a floor-tile. In combination with the decor tiles with the sixty-three different motifs, only the decor-less backdrop can be used in the 20×20 rectified and 20×60 rectified sizes. 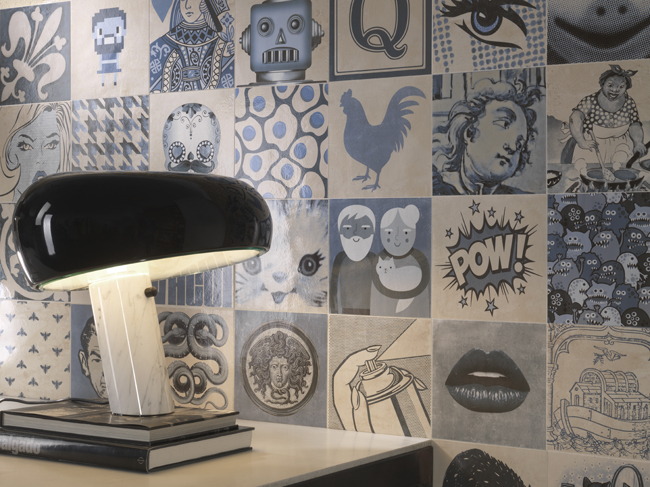 PLEASE NOTE! Indigo is meant to be a random mix of the 63 subjects that compose the series. Each individual tile is checked throughout the production process and is guaranteed to be free from defects, although absolutely no control is possible in the way the single subjects are selected to be packaged into boxes: it is not possible to guarantee the presence of certain subjects in boxes purchased, or that one or more images of the same subject will not be inside a box or inside different boxes irrespective of the number of boxes purchased. The presence of any such double subject does not ordinarily invalidate the total aesthetic impact of the installation, as long as the pieces are spaced sufficiently apart over the area to be tiled.